The morning after the storm, lower Puna looked like bombs had gone off in the wilderness. Trees were down. Roads were blocked. Power lines had been dragged to the ground. The massive, shallow root structures of albizias lay exposed like naked casualties, upturned on the sides of the roads. The extent of this timber ruin was alarming. 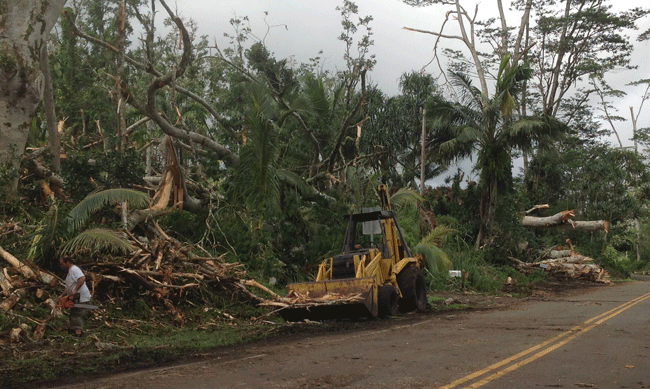 Prudence walked the length of her driveway out to Ohalani Road, peering cautiously upward and all around her the entire way. She climbed under and over tree trunks. She dragged loose branches into the jungle on either side of the drive. At the end of her walk lay what used to be the front gate, looking like something out of a fairy tale gone awry. A mighty albizia had fallen across the driveway onto the green metal gate, the carnage making hash of the property's entrance.

Matthew met her at the mangled ruin. Prudence waved tepidly, looked at the gnarled entry, and sighed. As they made their way back toward the house Matthew remarked, “It’s going to take a small army to clear this.”

“Tell me about it.” She saw many dollar signs and chain saws in her future.

Everyone was shocked to see so many trees down. It’s not uncommon to get torrents of wind blowing through: the prevailing trades can kick up quite a gust without causing any damage, maybe a fallen branch or two, occasionally a downed tree. But perhaps because the ferocious winds had come out of the south last night the trees weren’t prepared for it. Perhaps with the drought they had gone brittle. Trained to resist against the heavy trades, when the wind came from an unexpected direction they simply yielded and fell over.

Lau Lau called while Prudence and Matthew were sharing a pot of kaffir lime tea. He wanted to make sure Pru was ok.

“Crazy everywhere,” he said. “Me and the boys will come when we can.”

“Don’t worry. I have a pretty good chainsaw—.”

“And Matthew’s here…Yes, my neighbor…Yes, it’s good he didn’t come over last night…Yes, he’s fine…Miraculously, no damage.” Matthew had told her that trees were coming down all around him, but by grace or good luck not a single one of them had landed on his yurt. Truth is, he lived in a large clearing on a sloping piece of land, so it would have taken some true magic of physics to fell a tree directly on his unassuming home. Still, he insisted, the branches were flying out of the sky like matchsticks. Venturing anywhere might have been fatal.

It was with gratitude that Prudence and Matthew sipped their tea. The sun was out. It was hot. It was dry. The wind hadn’t blown a whisper all morning. The sea of tree damage aside, everything seemed reasonably normal. Then all of a sudden Prudence jumped out of her chair. She walked over to the sofa, looked around. Went out on the lanai and stood at the top of the stairs. She came around back and looked over the lower part of the yard, where she could see the roof of Manu’s cottage down below.

When she came back to the dining table, Matthew asked her, “What’s wrong?”

“It’s the weirdest thing. I was so high last night. Do you think—?” She pressed her hands against her eyes. “Is it possible—.” When she removed them it wasn’t clear if the look on her face was fury or astonishment. “He’s down at the cottage!” 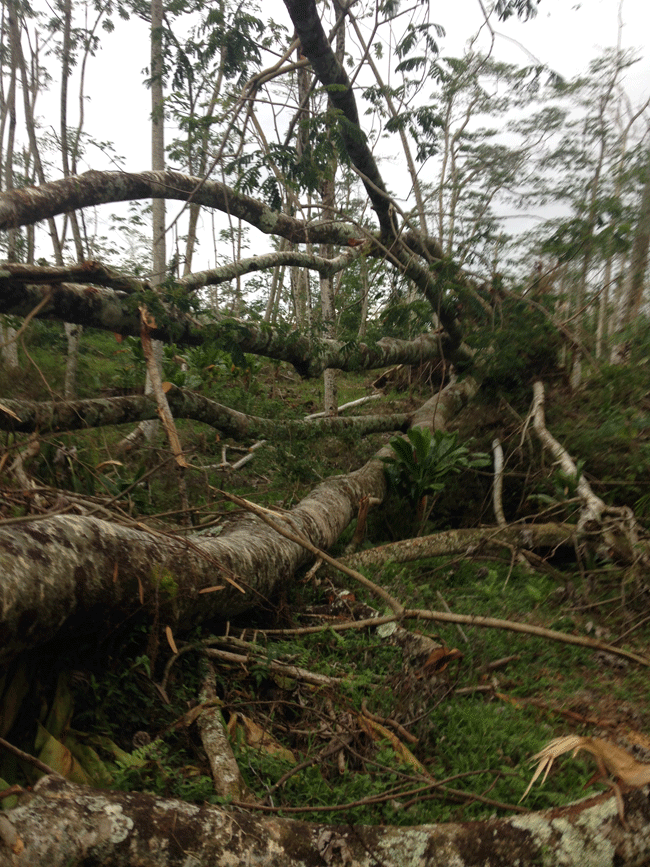 Prudence walked briskly down the scrubby hillside, Matthew stumbling to keep up. “Watch out for the hala!” she warned as she picked up her pace.  As they came to the bottom, where the land flattened out and the tall cane grass gave way to a dell of shower trees, she ran to the front of the ‘ohana and peered in through a window. Matthew lingered in the yard. Prudence hurriedly unlocked the door and went inside, looked in the bathroom and stopped momentarily by Manu’s old desk.

“Kyle! Kyle!” Then it dawned on her as she looked at the key in her hand: Duh. He couldn’t get in. She crossed the room and slid one of the back doors open. He wasn’t on the lanai, nor in the outdoor shower, and there was no sign of the red car she vaguely remembered from what she had thought (had hoped) was only a dream. She approached Matthew, who was roaming around the coconut lawn. “He isn’t here,” Pru told him.

“Well,” drawled Matthew, “somebody was here.” He pointed to the indentation of tires woven across the lawn.

“Oh—!” Prudence walked between the coconut trees, following the tracks with her eyes. She then stormed to the edge of the jungle, where the entry to the new road was. “That son of a bitch had better not be the first one to use this driveway. There is no way—!” But he had. Prudence trod along the pockmarked trail, scarred up now with tire tracks leftover from the Rinpoche’s flight toward freedom.

Matthew hurried to catch up. “Who are you looking for?”

They jogged and tripped their way down the road until they came to the spot where the bulldozer blocked the road.  There was carnage on one side, where the Rinpoche had apparently driven through the trees to get around the dozer.

“Keep going,” said Pru, and she and Matthew walked past the massive machine. As they approached Ohalani Road, Prudence saw that one of the boulders had been pushed aside and was marked up with red paint. She stood there shaking her head in disbelief. “Look at that. Talk about desperation.” She turned around. “For his sake, after all that effort, I hope he got away.”

“What was he doing here?”

“Long story. Of which you know nothing. You never heard me mention it.”

“Fine.” She began walking back, talking briskly, her brainwaves colliding.  “He was trying to get out of town because some of the locals were chasing him, except the Highway was blocked and he couldn’t get out, so he asked if he could wait out the storm here. I told him he could hang out at the ‘ohana until morning. No later.” 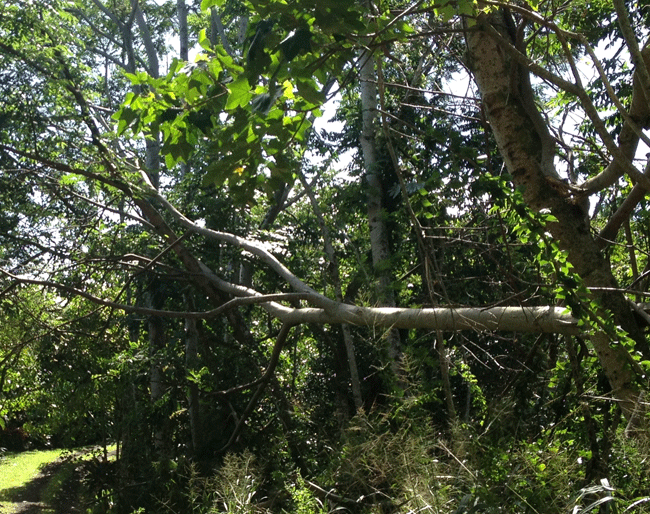 The wind-driven damage at Kukio Kai was not so great. It’s a large property: twenty, twenty-five acres, lots of openness. Plenty of native trees and bananas. Large plots of random shrubbery and gardens. No wicked albizia to topple in the night.

Pualani could barely rouse herself from bed. She’d been waking up all throughout the night, checking her phone, hoping for word from Kyle.

Now all she had was a case of nerves and a headache from lack of sleep. She made a squealing sound – her private distress call – then flung her feet out of bed onto the floor. “I give up,” she said. “What a masquerade.” She thought she’d go for a drive around Puna Kai, maybe up to the warm pond to clear her head or down to MacKenzie to throw herself off the cliff. And then she remembered, “He has my car!”

She picked up her phone. Dialed. Asked a few questions – the same question, really, each time phrased slightly differently but ultimately inquiring the same thing. “Not a word…? Nothing...? OK. Thank you, Pru.” She set her phone down on the night table and for the first time since she arrived on the Big Island, she cried the heavy, weeping tears of the little girl she thought she’d left behind in Snohomish.