Manu’s luau ended just before sunrise, when the last of the Punatics staggered down Prudence’s long driveway and headed home. 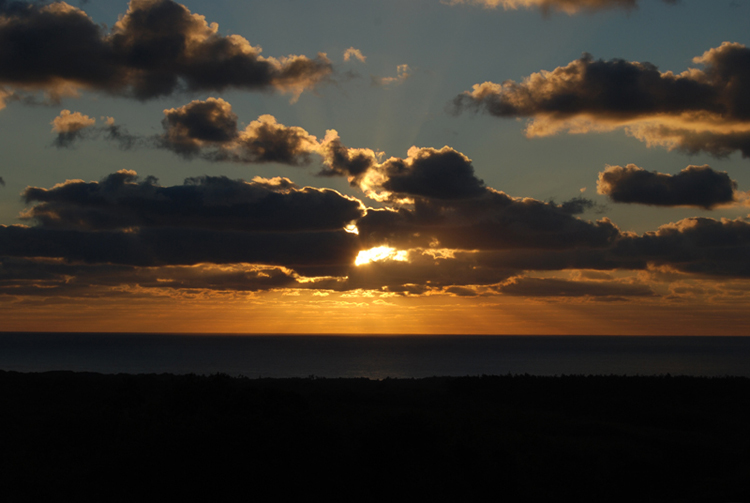 Unseen to most of the revelers all throughout the late late hours of the night, the menehune, a tiny race of human creatures who lived in the jungle along Old Government Road, moved effortlessly among the hordes, straightening things up, gathering trash, clearing bottles and roach clips from the lawn, steering wasted Punatics away from menacing lava tubes, and otherwise doing everything they had to do so that when a sliver of red sunlight cut across the horizon announcing dawn all that remained was for them to slip back into the jungle, leaving Prudence’s property looking mostly untouched.

Prudence hadn’t had any sleep. She and Lau Lau had retired to her lanai to watch the sun rise. She was leaning against the rail and he was standing behind her, close, his strong arms wrapped around her waist and his long hair, his skin – every bit of him – smelling like smoke from the imu.

The stragglers had departed and a few friends were asleep in Manu’s cottage. The smoke from the fire pit in the jungle struggled skyward, like a final signal calling the event officially pau. The Aunties had long gone, except for Violet, who held sway over the menehune and stuck around to monitor their work. As the sun lifted skyward behind a mass of glowing white clouds, she appeared beside Prudence and Lau Lau on the lanai.

“My work here is done,” she announced. “Time to get these old bones into the warm pond.”

Prudence stepped out of Lau Lau’s arms and leaned down to give Violet a hug. “Thank you SO much.”

“The enjoyment was all mine. Pale ka po, puka i ke ao,” she said. (Set aside the night, bring forward the day.)

Violet disappeared and Prudence turned her back to the sea. The sun was beaming through gaps in the clouds and it warmed her shoulders. She felt as if she were living in a dream, so intense and lovely was the hangover from Manu’s luau. The whole event replayed in her mind from start to finish; it had entered her blood as a living, streaming memory – always there, never to be forgotten, available for immediate recall simply by closing her eyes.

She wandered over to her napping couch, a futon set in the sheltered corner, and lay down on her back. She held her arms out to Lau Lau, who gently approached and lowered himself down onto the futon beside her. She moved her hand down to the thin folds of his pareo. Feeling him aroused, she untied the knot and slid it off of his body. With a grin, she encouraged him to come closer. Lau Lau stretched himself out on top of her and she closed her eyes until every cell of her being was consumed by the scent of his smoke. 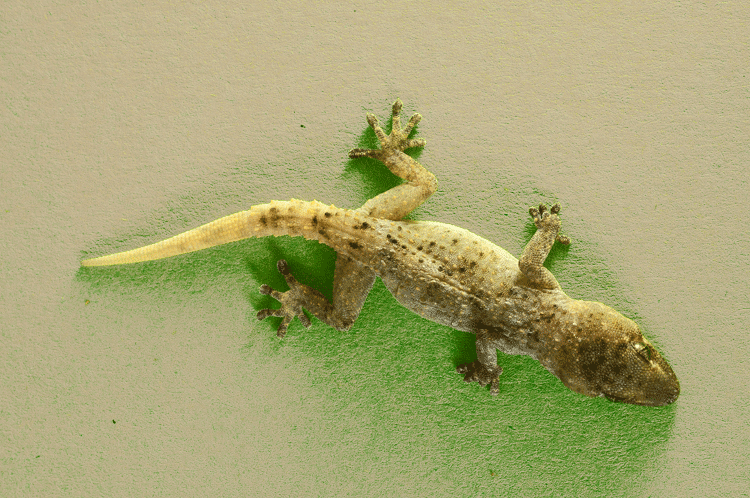 Eight-thirty on that same Saturday morning.

Kay Watanabe lay in bed staring at a brown gecko on the wall. The spotted little thing was stealthily preparing a measured attack on a moth. It ever so precisely positioned itself, shifting its squiggly round toes fore and aft to poise for the attack.

Kay didn’t want to go back into the Garden Snack Club. She was tempted to call I’ilani and beg her to come cook, but she knew that I’ilani probably hadn’t begun recovering from the luau – probably hadn’t gone to bed yet even (Puna luaus are famous for running all night, or until the last water-soaked log fails to light). It would hardly be right to ask her to come in. Nevertheless, after the madness of Friday she wasn’t sure she had the fortitude to step foot into the kitchen one more time.

Her first day had gone ok. At the start of Thursday’s lunch shift, she was gingerly constructing a Seafood Jungle -- half a grilled pineapple filled with fish and peppers swimming in a red curry sauce. A small woman in her late 50s, she moved about the kitchen of the Garden Snack Club with a great deal of clumsiness at first. I’ilani, her excellent, reliable, and noticeably taller cook had arranged things for her own height and reach, causing Kay to be constantly stretching and standing on tip-toe, never quite able to orchestrate her movements.

She figured out pretty quickly though that if she turned a few pots upside down on the floor she could used them as stepstools. So by the end of lunch shift she was bobbing up and down behind the kitchen counter like a tiny, well-trained dancer.

Friday, on the other hand, was a disaster: there had been issues with the restaurant before opening and almost from the minute they opened she and Solia were inundated by an inordinate number of diners and errors. The dinner rush was chaos. It was as if the Garden Snack Club had been swallowed by some great, dizzying vortex. 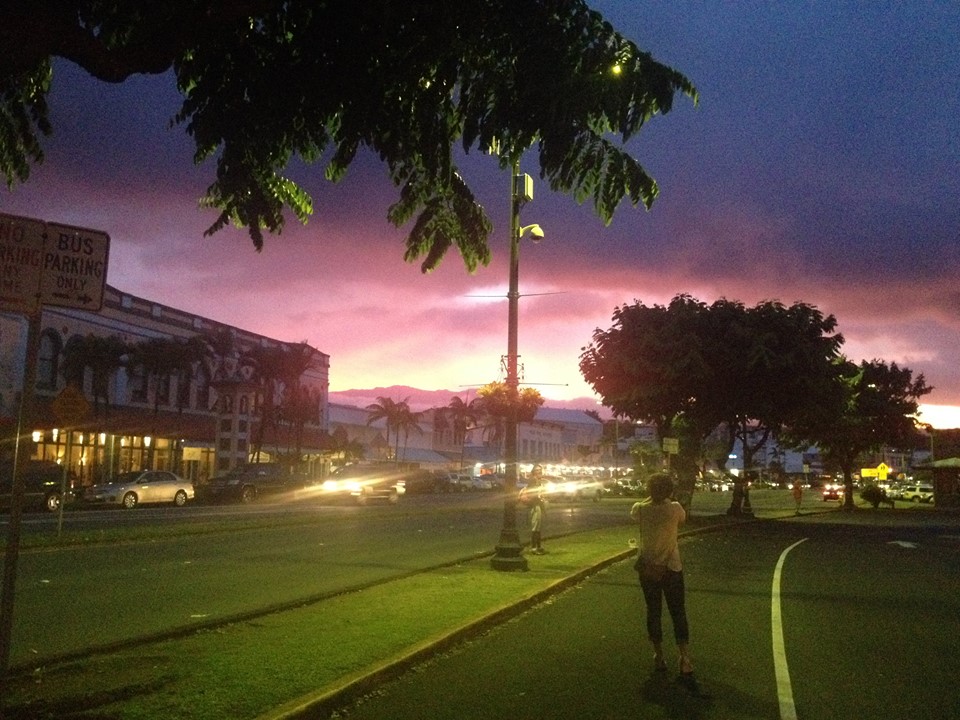 If you’ve eaten there, you know there’s no formal rhythm to the Garden Snack Club. There’s more of a random island ease to the way in which food arrives at your table. To an outsider it may seem disorganized – understaffed, slow, erratic. But from the inside things worked via their own sort of haphazard magic.

All Friday evening, Kay was moving at hyperspeed trying to keep up with the orders. The place was packed, even with the rain. Try as she might, the faster she worked the further behind she became. Out front, Solia couldn’t keep her orders straight and was making every possible mistake she could from the playbook of bad waitressing.

Solia went into the kitchen at one point and said, “Kay, what is going on? I can’t get anything right!”

“I don’t know.” Kay had tied a bar towel around her forehead to battle the heat and perspiration. She looked like a sugar cane worker struggling in the sun. Meanwhile, the rain that had been falling in droves all night continued to rattle the roof. “How did we not know the cruise ship was in today?”

“These aren’t all cruisers. It’s a lot of locals and Kona folks.”

Out in the two small dining rooms there had been a disruption in the force fields that governed the passage of molecules in the air. Photons became neutrons and electrons reversed their charge. Orders were misplaced, items forgotten. A slovenly couple from the cruise ship stormed out at one point. Having drunk their mint ginger iced tea with bitter faces, upon sucking the final droplets in their glass in loud obnoxius slurps they stood up and the husband announced boldly, “What a place! I’m going to complain to the ship’s purser. What a terrible recommendation!” As they stormed out the screen door slapped angrily against the frame, wishing everyone in the place the very opposite of aloha.

Solia threw up her hands and just shook her head. 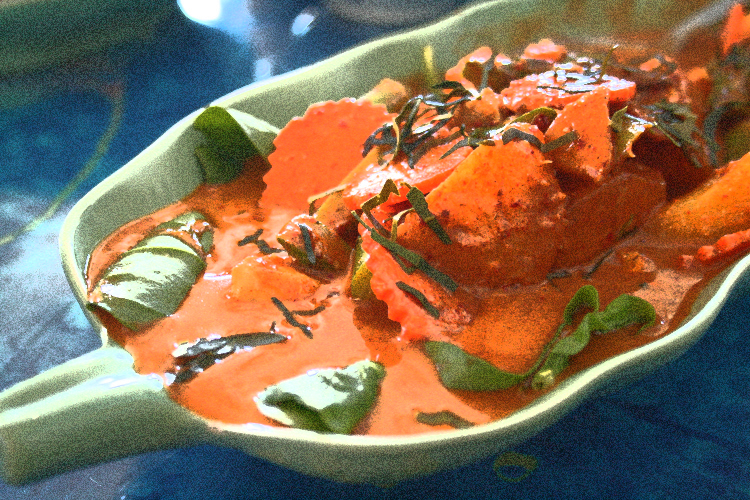 By eight-thirty that evening (late by island standards), things had quieted down: Solia placed the last dish in her queue of orders onto table number six in front of a disgruntled young honeymoon couple who were trying their best to be sympathetic.

Just then the rain stopped. So loud had been the sound of the constant downpour that its sudden absence made you pay attention. Solia went to the counter where the register stood and started sorting through her tickets. First she closed her eyes, then she let out a sigh of relief.

The young couple ate quickly as Solia started her closing-up chores. They paid their bill. “Mahalo,” she thanked them, handing the husband the credit card receipt to sign. “Sorry about tonight. It isn’t usually like this.”

“Oh. Well, thank you.” Solia pressed her palms together and dipped her head in gratitude. “Enjoy the islands. And each other.” She wished them a happy life.

After the couple left, Solia cleared their table and took the dishes into the kitchen, where Kay was raising a Vietnamese beer bottle to her lips and Timo, the dishwasher, a boy from Laupahoehoe, was undoing his apron.

“Arrrgghhh,” he said painfully, seeing the dirty dishes in her hands.

“Great!” He tossed his apron into a bin and rushed out of the restaurant. The jangling of the front bell and the hefty clap of the screen door against the frame announced his flight of adolescent freedom into the Friday night.

Solia put the dishes in the sink and gave them a quick rinse. “Quite a night, Kay.”

Kay nodded. She focused all her bodily faculties on enjoying a swig of beer.

A gust of wind blew down Punahoa Street then in through the screen door and all the way back into the kitchen. It wasn’t a cozy breeze, though; it was sharp and piercing, as if it had been swept up from the deep dark water of the ocean.

“Reminds me, I need to lock up the front.” She turned off the water and walked around to the main dining room.

The neon had long since been turned off so she was surprised – startled, really – to see a man standing on the other side of the screen door looking in.

He opened the screen door and stepped inside. “That’s ok.”

The bell jingled almost weepily, as if it had run out of energy. When it stopped, the man spoke. As he did, every hair on Solia’s forearms stood upright: “I'm looking for Prudence Overmeyer.” 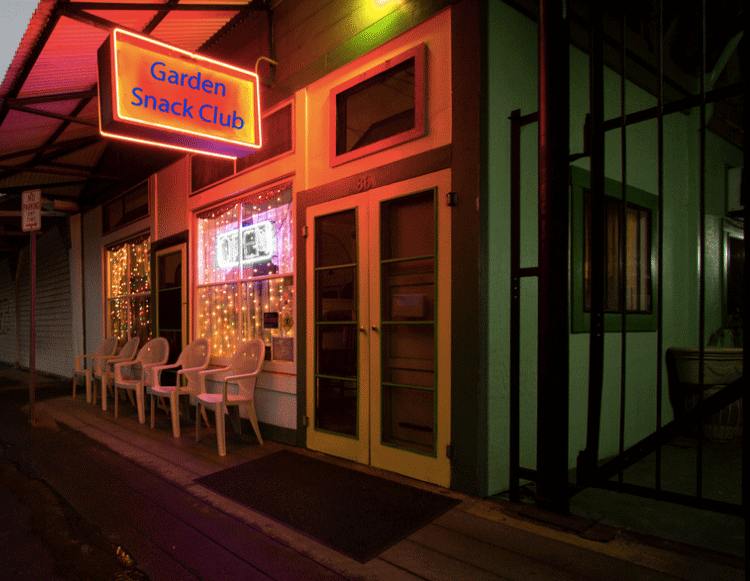 Kay lay in bed Saturday morning struggling with the thought of getting up. The gecko on her bedroom wall lay in wait, motionless, only its chest swelling and deflating with its breath as it watched the moth. Its eyes shifted slightly to keep it in the crosshairs of its sight.

The man who came in last night after closing – a strange man, average looking but unsettling; slippery... He troubled Kay. She had heard Solia talking to someone out front so she went into the dining room and saw Solia, her arms folded tightly in front of her chest, inching backward, away from the man.

“Can I help you?” Kay said as she approached them.

“My name is Rinpoche. The Magnificent.”

Kay glanced at Solia, then stared the man in his dark cloudy eyes. “And I’m Kay. The Restaurant Owner. Sorry, but we’re closed.”

Kay paused for a moment. “I have a plate of leftover vegetarian spaghetti if you’re hungry,” she said. “You can have it to go.”

“Yes, I know. I'm sorry, I can't help you with that.” She approached the screen door and pulled it open. "If there's nothing else—.

He looked at Kay with a mixture of annoyance and an attempt to make her feel pity, but she wouldn't have any of it. "No," he said. "Nothing else."

When he was gone, Kay promptly locked the door behind him. This young man come looking for Prudence, she knew right away she didn't trust him. "You give, you get," she said feverishly to Solia. "This man is a taker, I can tell." He was one of those people who you can't recall what they look like–couldn't pick him out of a lineup just by sight–but you could sense him. 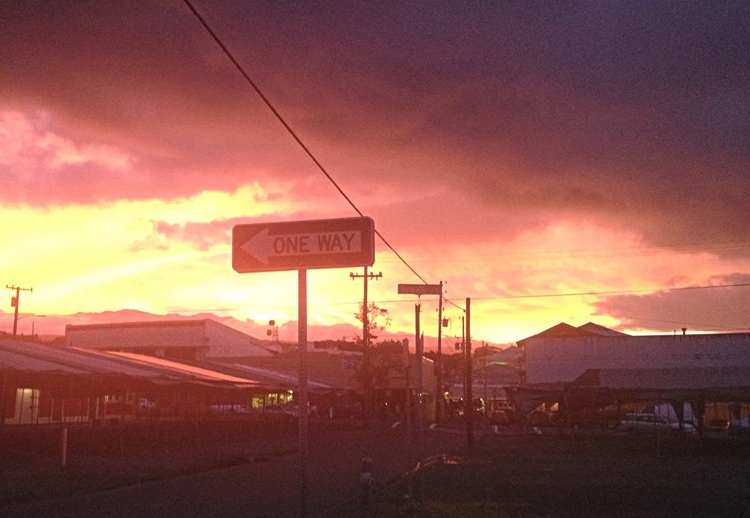 When they left the restaurant a short while later, the street was deserted and the wind was rising. Kay knew the Night Marchers were coming.

She tugged Solia toward her car and she drove them quickly out of town across the whistling bridge. From the car Solia nervously called Norbert, her husband, on her cell phone and told him to turn around wherever he was and go home: "Kay is driving me home."

back up ↑
* Po'o Nui = Hangover, worried head, worry; to be a “headache” or source of trouble (as in the Rinpoche).