CHAPTER 1: The Small White House on the Hill

The Garden Snack Club has a tiny bell above its entrance that jingles anytime the door opens. First there’s a squeak of the screen door’s hinge. Then the delicate tingle of the bell announcing Customers!  Then the clap of the screen door against the frame. It’s a perennial sort of pattern that counts out the slow rhythm of days at a simple two-room restaurant in old Hilo town, on the Big Island of Hawai'i.

Generally, people come and go through the screen door in small numbers, chatting between the pastel painted walls of yellow an­d pink and orange. A few are tourists – their numbers ebb and flow with the season, as well as with the economy. Mostly it’s locals, though, who come after work at the garden center across the street or during lunch breaks from their nearby courthouse or local government duties.

Business at the Garden Snack Club is unpredictable; like the rain that falls here on the eastern side of the island, you know it will come but you never know quite how much or from which direction.

It had been slow that day: dinner was done by seven-fifteen. Even Punahoa Street, which ran in front of the restaurant, let out a yawn beneath the disappearing daylight.

Prudence Overmeyer, a 34 year old haole with wavy brown hair pulled up into a casual bun, stood at the cash register in the kitchen and tallied up the day’s receipts.  “Quiet night,” she remarked to I’ilani, the cook, as she slipped cash and receipts into a zippered envelope.

“Cruise ship comes in tomorrow,” I’ilani replied. The cook was about the same age as Pru. She was half Hawaiian, half Asian, and had long black hair which she kept tied in a braid that fell down to almost her waist. The cruise ship was called Star of the Islands and it did a week-long journey around Oahu, Maui and the Big Island, docking for a night or two in each port.

A cruise ship meant incremental customers for the little restaurant. Although the Garden Snack Club wasn’t difficult to find, the owner did no advertising. You had to know about it or else you probably wouldn’t stumble across it. However, a few curious stragglers from the cruise ship would inevitably wander in, and online reviews, a novelty until recently, were starting to bring in the uninitiated. 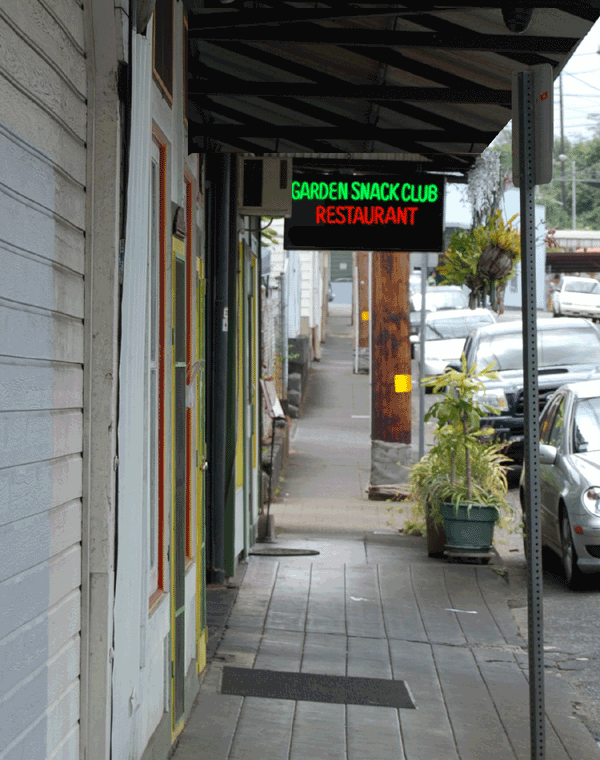 The Garden Snack Club sat on a sleepy road behind the garden exchange, in between the old distribution center (now used for storing fertilizer and delivery trucks) and a boarding house where migrant dock workers used to live. In long ago days the restaurant was the kitchen for garden exchange workers, who flocked to downtown to manage the flow of floral goods in and out of the port of Hilo.

But then the business world consolidated and the economy waned after the sugar industry abandoned the island. As economics shifted, low-cost big-box stores appeared in a new shopping center outside of Hilo town, pulling business away from the historical district. In order to survive, the exchange transformed itself into a garden supply shop serving old Hilo town and the agricultural district of north of town. The workers’ kitchen was opened to the public to bring in additional revenue and to share the kitchen’s specialties with the public: seafood jungle served in pineapple, curried ono, vegetarian spaghetti…all washed down with a sugary bright, cold, fresh mint tea.

Prudence said goodnight to I’ilani and her daughter, June, a quiet twelve year old girl who spent her evenings at the Garden Snack Club doing homework at the back table or helping trim produce while her mother cooked. Pru placed a quarter in the outstretched hands of the standing Buddha statue in the corner so that good fortune would continue to befall the restaurant and all those who worked there. She lowered her head to the Buddha and then waved to I’ilani and June, “Aloha.”

“Night, auntie.” The young girl waved, barely looking up from her homework.

Pru left the Garden Snack Club. It was a forty minute drive from the restaurant to her house on Ohalani Road, in the jungly wilds of the Puna District. On slow days like this it was hardly worth the cost of gas to drive all the way into town. However, in Hawai'i you don’t always do what makes sense, you do what is pono: what is right. 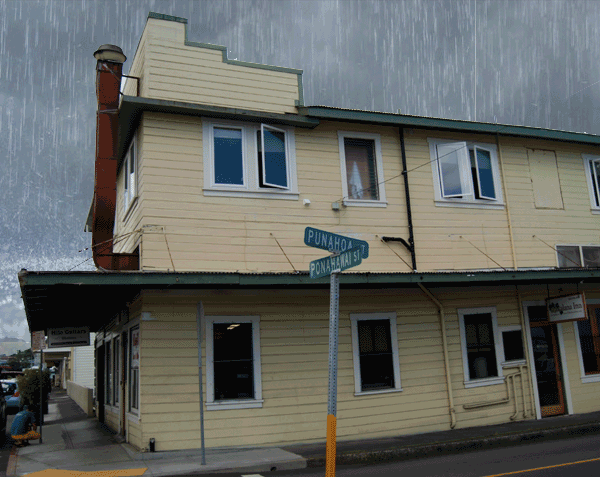 Outside along Punahoa Street a light, slow moving rain, ko’iawe, was falling. It wasn’t strong enough to warrant Pru making a detour to grab the umbrella from her truck. Heading down Halakalua Street, she kept close to the bodies of the buildings, the overhangs of the roofs providing shelter from the gentle rain. Midway down the block she stopped at the bank. She opened the night deposit drawer with a key and dropped in the night’s receipts. She shut the drawer and put the key back in her purse.

Down at the bayfront she turned right and passed in front of a row of shops, their exteriors breathless and a bit haggard, still struggling to shake off the malaise of an economy that was trying to reinvent itself after the disappearance of sugar.

Across the bayfront road, the remnants of sunset from the other side of the island lingered on the horizon. Smatterings of pink-painted skies were faintly visible through the veil of rain settling in on Hilo Bay.

Hilo faced eastward, blocked from the sunset by the magnificent shadow of Mauna Kea, the second tallest volcano on the island, dormant now and topped with seven star-gazing observatories that looked like balls of white sugar scattered across it peak.

Because the 13,000 foot Mauna Kea sat directly in Hilo’s backyard, sunset for those on this side of the island was the point at which the sky went from pale blue to matted grey on its way to nighttime black. There was no fiery orb to watch gliding into the sea, as there was on the other side of the island, where all the tourists and resorts were. Rather, once the sky went dark in East Hawai'i the white moon would rise in slices, rounded chunks or slivers, and occasionally as a large, white, ominous globe. Sometimes nothing rose from the sea and the stars failed to emerge; the sky would simply be empty, covered in dark rain.

On this windward side of Hawai'i the night fell faster and the rains fell heavier than they did anywhere else in the world. At least in the world that Prudence had seen, which wasn’t extensive: Rhode Island, where she grew up; northern California, where she went to college, a bit of Mexico…

Pru passed through the door of the Hilo Natural Foods store just as a percussive bout of thunder rolled down the flanks of Mauna Kea and rumbled over town, rattling the tin roofs of the downtown storefronts. The inside of the health food store smelled of turmeric, black pepper and green herbs. An earthy scent of bulk grains permeated the center of the store and the all-natural remedies and potions aisle exploded with lavender and lemon verbena and made the back of the store smell bright.

Pru gathered the few things she needed for the house – biodegradable cleanser, natural coffee filters, some wheat germ and a few trifles. She got in line behind a young white couple in dreadlocks who stank of patchouli and body odor. Rain started falling more audibly, leaving soundprints on the roof like the footsteps of a horde of menehune, growing ever louder and heavier. After the young couple paid and left, and once she’d given the air behind them a moment to clear, Pru set her few items down on the formica counter.

She greeted the checker: “Aloha.”

Reason, the girl behind the counter, smiled back. “Aloha, Prudence. Busy tonight?”

“No, it was quiet. I turned off the neon at quarter to seven.”

“Same here. It’s like a ghost town.” Rain echoed throughout the store. Reason tallied up the cost of Pru’s things and looked skyward: “Here it comes.” She hit the Total button. “Sixteen forty-nine.”

Prudence looked at the register and into her wallet: her work day had been a net loss. She paid Reason and wished her aloha. “Stay dry.”

Pru walked to the front door and then stopped. She thought she might wait for the heaviest part of the rain to pass. Outside, the wind had picked up and through the glass door she could see the outlines of shower trees and coconut palms along the bayfront weaving back and force against the backdrop of a deepening, dark blue sky. A heavy slanted rain, ua hikiki’i, had descended on the bayfront, raindrops the size of kukui nuts. It gathered in large sloughing puddles which created a sloshing sound as cars moved through its wake.

As she waited, Pru took a glance at the bulletin board hanging on the wall. It was full of notices posted on handwritten three-by-five cards: rooms for rent, garage sales, homemade trinkets, massage services and computer help. There were a few printed flyers and a couple full-color posters advertising an Indonesian film series at the movie house and an upcoming concert series at the Palace Theater up the street.

In the lower portion of the board she spied a plainly styled flyer on orange paper with a portrait of a white guy with a Sikh-like turban wrapped around his head. It advertised:

in a new workshop…

For a moment she thought nothing of it. Put a man in a tunic, mala beads and a headdress and he could be anyone, she thought. It didn’t mean that—.

She looked at his picture again.

“It couldn’t be—,” she whispered. She looked away and poked her head out the door. To her dejection, the rain was only coming down more heavily.

She stepped back inside and looked at the photo on the poster again. She studied the face. To her alarm a pair of deceitful eyes stared back at her, full of themselves and full of empty promises and treachery. She knew those eyes. That face. Despite the poor quality printing. She scanned the guru’s biography and confirmed it.

Prudence laughed. She pointed to the flyer and called out to Reason. “Did you see this? Do you know who this is?”

The cashier shook her head no.

Pru tapped the bulletin board with an angry finger. “I can’t believe this loser is coming back to the Big Island.”

Ordinarily Prudence wouldn’t do such a thing; it wouldn’t be pono. But she did it anyway. She ripped the flyer off of the bulletin board and shoved it into her grocery sack. She left the natural food store and darted out onto the rain-drenched sidewalks.

Once inside her pickup truck, which she’d left parked in the empty lot across from the KTA, she pulled out the flyer, stared at it again, and then shoved it into the pocket in the door. She undid the loose bun on her head and dragged the rain water from her hair. She wiped her hands on her pants and prepared herself for a long, angry drive home. 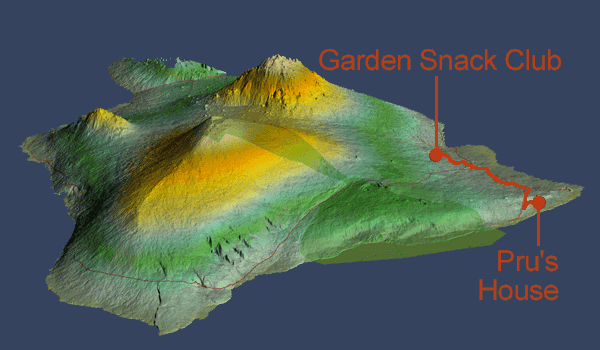 If you created this beautiful topo map, contact me so I can credit it.