2.4   The Benefit of Perspective

Thursday afternoon arrived and found Prudence’s property abuzz in a state of semi-chaos. Less than 24 hours remained before the big event.  Monster pickup trucks were driving in and out of the jungle drive all day long, delivering tents and chairs and tables, strings of lights, wood for a makeshift stage, charcoal and banana leaves for the imu, backup generators – anything and everything that would be needed for tomorrow’s luau.

I’ilani arrived around two o’clock to check on things. She had gone into the Garden Snack Club early in the morning to set things up for Kay, the restaurant owner, who would be cooking in her place these two days. ("No, auntie, three days," I'ilani told her; "Saturday I don't think I gonna want to cook.") It had been a while since Kay’d been in the kitchen. I’ilani and her daughter June got all of the prep work done early so that Kay could focus on reorienting herself and remembering how to cook the items on the menu.

When at Pru’s house, I’ilani stood on the back lanai alongside her friend and co-worker watching the commotion in the lower yard. Prudence had taken a break from trying unsuccessfully to help out down below (the three Aunties – Ruth, Grace, and especially Cousin Violet – had things under control) and so I’ilani took it upon herself to simply provide a healthy perspective. “Looks like everything is coming together.”

From their vantage point on the lanai, the two women looked down upon what could rightly be described as a makeshift village. Lau Lau’s tents were big: forty feet long and twenty feet wide; he and his group of men had erected four of them. Two of them were latched together in the grassy area on the side of Manu’s cottage and that was where the food and drinks would be. The other two were nearby, also latched together. They were set up just inside the coconut lawn, its numerous palms creating a striking halo around which the hula would be performed.

There was a fire pit as wide as a small Saturn moon carved into a circular clearing in the jungle. The imu, over in the vicinity of the tall grasses was big enough to fit a Volkswagen.

Ruth Wana'aonani, from the Crater Inn, was overseeing the stage setup and lighting along with the kumu halau from Ke Kai O Kahiki. When Prudence told her that the hot male hula troupe were indeed going to perform tomorrow night, I’ilani squealed uncharacteristically with delight – just a little bit, mind you.

Another rain shower came in and movements slowed down below. The rain started falling more heavily as Prudence and I’ilani scanned the sky. 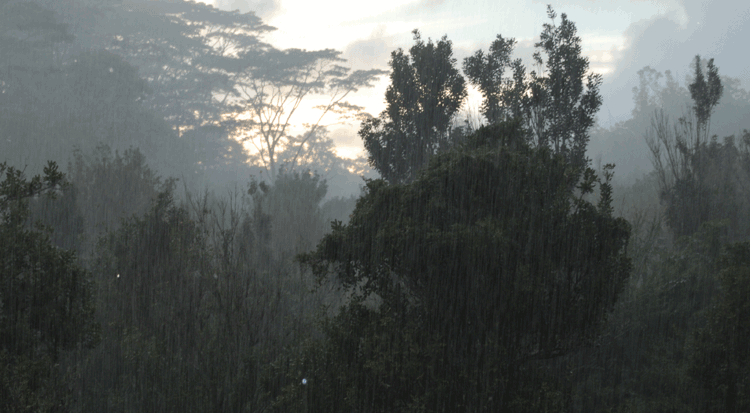 I’ilani was right. A drenching rain, ho-’e’ele, began to fall. The heavy rain sent everyone under cover. After a few minutes, engines started up and a line of pickup trucks converged on the makeshift road up toward the house.

Prudence was disappointed: “Yes, I see that.” The two of them walked around to the side lanai to keep away from the blowing rain. As they did, Prudence spotted a golf umbrella of red and white stripes moving spiritedly along the path that wound up from Manu’s cottage.

Cousin Violet passed through the giant clusters of bamboo on the hillside and hollered “Aloha” from beneath the house. “Prudence?”

Violet Fukumora leaned backwards to look up and the wind nearly snatched her umbrella away.

Cousin Violet had arrived early in the morning, barely after the chorus of coqui frog chirpings had yielded to the morning songs of the birds. Prudence was on her first cup of tea when Violet materialized beneath semi-gray skies at the front steps of the house.

“I didn’t hear you drive up,” Prudence said to her.

“No, thank you. Don’t mind me. I just wanted you to know I was here. Go about your day.”

“We’ll holler if we need you. It’s very aloha of you to offer your property for the gathering; that will be work enough.”

Cousin Violet, a tiny woman of near-magical fortitude, spent her day orchestrating the setup. When she wasn’t up top directing traffic, she was down below providing guidance on where to put the tents and the stage and discussing wind patterns and things like toilets. (Actually, the lack thereof. But that is why living on the edge of a jungle can come in handy.) It was a showery morning, nothing extreme like the rain that would drive everyone off the property later that afternoon, and Violet moved throughout the grounds with her red and white striped umbrella always in hand.

All day long Violet’s umbrella popped open and closed, like a candy cane flower opening and closing in inverse direction to the rain.  She had spent some time the night before sketching the general layout of things, as she envisioned them. She kept the piece of notebook paper in a plastic baggie and guarded it in her rain jacket, pulling it out only when necessary to demonstrate where things should be set up and why. 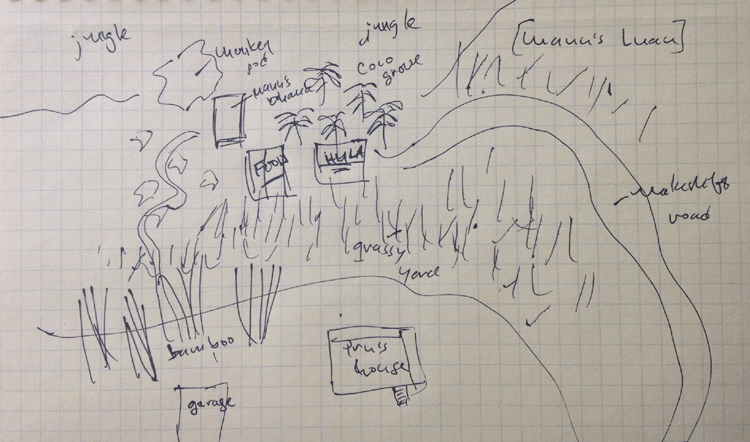 Violet pulled her umbrella shut and rapped the tip on the wooden floor of the lanai. “Please.” She peeled off her black rain slicker and draped it over a dry stretch of rail. “One cup and I’ll leave you. I need to get my chilly bones into the warm pond.”

The three women went inside, where Prudence put a kettle of water on the stove to prepare a pot of oolong tea.

I’ilani wandered the little house as Violet sat down and retrieved a clove cigarette from her blouse: “May I?”

Prudence’s bedroom sat adjacent to the kitchen. I’ilani stood at the window in the bedroom overlooking the parking lawn in between the house and the garage. “Who’s that?!” she asked.

“Must be Matthew Lawless. He lives on the other side of the Highway.”

Cousin Violet got up and went to the window. “He’s naked,” she remarked.

Prudence headed quickly over to the window. “Oh!” Sure enough, Matthew’s tall naked frame stood like a gleaming white beacon beside the rusty hinged Yoda. “Moonrise in Puna!” she called out through the screened window. “Aloha!”

Matthew looked up, slightly mortified to see three women staring down at him. He reached into the truck and grabbed an old worn towel and quickly wrapped it around his waist, fumbling for words to explain himself.

Matthew gave her a thumbs up. “Didn’t realize you had company.”

“I was stringing lights on the food tent and slipped off the ladder.” He lifted a pair of blue jeans and a t-shirt, both smothered in mud, from the bed of the truck. “We’re going to have to put some cinder down in a few spots. Unless you’re offering mud wrestling tomorrow, as well.”

“Sounds good to me,” said I’ilani.

“I’ll have some cinder brought over from the pits,” volunteered Violet.

Prudence invited Matthew up for tea.

“I-uh…I’m not exactly dressed for it.”

“All righty. But get going; you’re getting drenched.”

Matthew nodded. “I’ll come back in the morning to finish, unless it clears up before sundown.”

“Sounds good. Mahalo nui for all your help.”

Matthew slid himself into his truck and shut the door. He rolled the window down just enough to fit his hand through the window and send some shaka love to the three ladies. 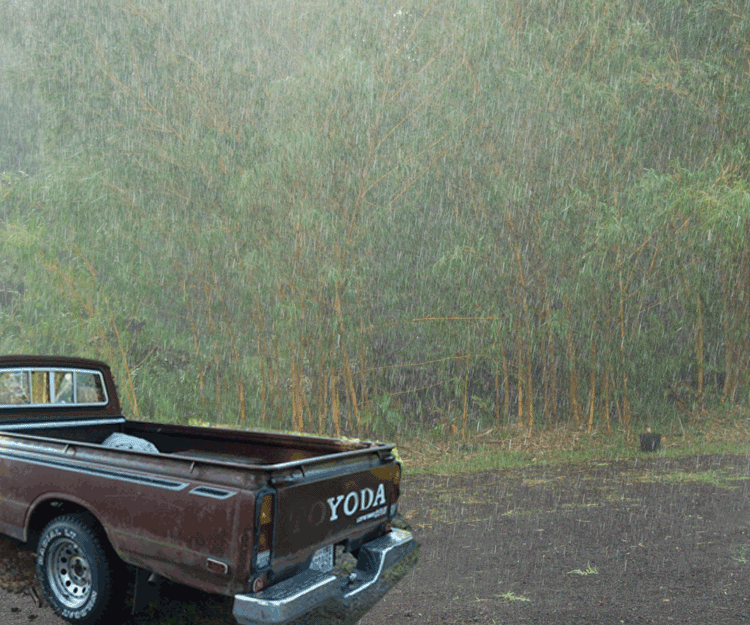 Over tea, the women got back to business.

I’ilani told Pru she’d made a list of who was bringing what food to the luau.

“I thought you said no planning,” she teased.

She brushed her long hair off of one shoulder. “You know better than that.” I’ilani ran a tight kitchen at the Garden Snack Club, but it was a kitchen of one. It was her kitchen, built upon a simple structure of preparedness, with an allowance built in for the random and unexpected. Such was her approach at helping out with the food for the luau, as well. The Aunties had lined up a squadron of cooks, but it was I’ilani who did the back room politicking to make sure there was a good distribution of dishes. “They say they gonna bring this or that but in the end who knows what they’re actually gonna bring. But at least we discussed it.”

“Thank you for doing that.”

Violet asked: “So what does this rough approximation of a menu look like?”

“It looks good. Nice mix of good stuff. Lots of love on here.” She unfolded two handwritten lists of names and phone numbers and food items.

“Oh my god,” said Pru. “All of those people are bringing food?!”

“Don’t worry, Prudence,” said Violet assuredly. “There will be plenty of food for 300 people.”

“More or less. I estimate around two-hundred and seventy-five. The rain might keep some away.”

“Oh my god. I was expecting a hundred, or hundred-thirty tops. I’ve never had more than forty people here at one time. How are we going to manage 300?!”

I’ilani laughed and Cousin Violet gestured toward the sky: “Akehele will help us.”

I’ilani pushed her chair away from the dining table and stood up. She folded her lists back up and slipped them into her purse. “Ok, sister, I’m leaving now. I have to go check on Auntie Kay and make sure everything is going good in my kitchen.”

“Thank you for coming by.”

“June and I will do our prep again tomorrow morning then come here early in the afternoon to keep you jumping off the cliff.”

“Sounds good,” Prudence chuckled. She walked with I’ilani down to the bottom of the stairs and watched her get into her truck.

“You call if you need anything,” I’ilani called as she drove across the lawn.

When Prudence went back upstairs and inside, Cousin Violet had disappeared. In an ashtray near the edge of the table was the smoldering stub of her clove cigarette. And in her tea cup a kaffir lime leaf folded like origami into the shape of a bird.

"Violet..." she admonished. She shook her head and doused the cigarette butt with some tea. 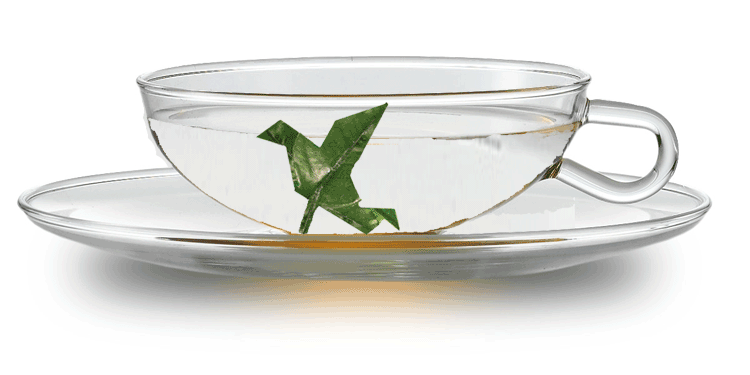