“He calls himself Rinpoche the Magnificent. Can you believe it?! Magnificent Fraud is more like it.”

Prudence, with a rag in hand, moved back and forth across the cottage removing books from the far bookshelf and stacking them on the desk near the front door, where Auntie Lulu was.

“How do you know this man?” Auntie Lulu asked. Auntie was a big gal, three-quarters Hawaiian, wrapped in a yellow pareo the color of sunrise.

“We dated. In fact, he’s the one who brought me to the Big Island.”

“Well,” Auntie remarked, “we can be thankful for that at least.”

“His real name is Kyle Weatherly.”

“Kyle? That doesn’t sound like the name of a kumu.”

“Trust me, he’s not. He was a motivational speaker back when I knew him, but he was incapable of following his own advice. Always grasping, always scheming or scamming someone—.”

“People can change, Prudence.” Auntie Lulu set a handful books in a box. “If they find it in their hearts. Sometimes they realize that what they do isn’t pono, so they change. I’ve seen it. We saw it here with Manu.”

Prudence wiped a fine grey dusting of mold from a handful of slim books.  “I suppose.” 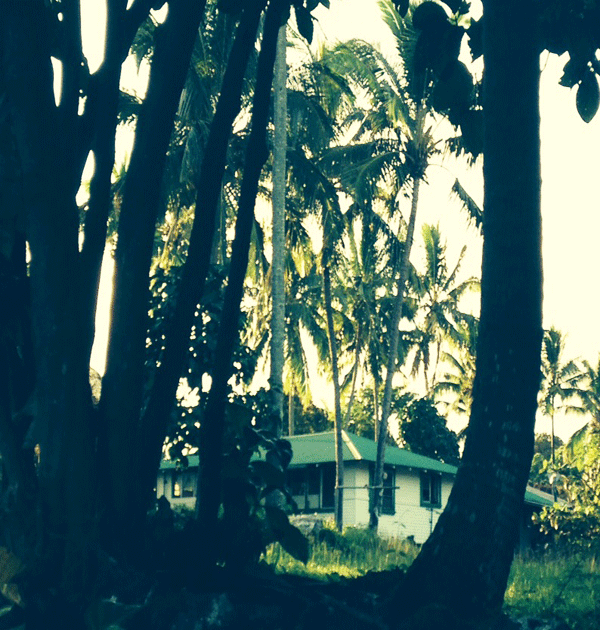 Manu, an old poet, used to lived in the small ‘ohana on the lower part of Prudence’s property. The house was traditional Hawaiian style with a low sloped roof and windows set high beneath the eaves to help keep out the rain. The house was painted a soothing blue on the outside and was surrounded by shower trees which blossomed into puffs of pink and yellow during the summer. Over the course of the years the paint had dulled into a comfortable shade of cloudy skies. Inside, the house was pleasant and light. The wooden floors had been long ago painted yellow and were now weathered in age; the single frame walls were a rustic white. Two pairs of paned glass doors stretched across the back and opened to a deep porch that overlooked a lawn populated with coconut palms and a large mango tree.

Manu had died a few weeks back and it was Pru who had found him, slumped atop his writing desk. Manu was a wise elder. In Manu Prudence had her own live-in kumu, or teacher, as well as a confidante and father figure. She was so distraught by his passing that she’d left the house untouched until this morning, when Auntie Lulu came by and insisted it was time to begin cleaning out his things.

Manu’s bed was just inside the front door, to the right. He kept a set of bookshelves beyond that, in front of which was a loveseat where he sat to read, or sometimes napped if the mosquitoes were too active outside. To the left of the door was his writing desk and in the adjacent corner a small kitchen. Behind the kitchen was the bathroom, and beyond that – outside, one with the elements – was Manu’s shower, surrounded by lava stone and a yellow-green thicket of areca palms.

Auntie Lulu, a relative of Manu, was helping Prudence pack up Manu’s books so they could be donated to the high school and local museum. She moved among the books with deliberate thoughtfulness and authority. It was she who did the sorting, first looking at each one’s cover, then inspecting the spine, then checking for notes and inscriptions on the pages, and finally deciding on Manu’s behalf the fate of every volume.

Manu was a writer and historian, a poet of the Hawaiian language. He kept handwritten diaries filled with collections of historical chants and his own verses. These mismatched little books of different sizes sat alongside a mix of books that piqued Manu’s interest: botanical guides, European poetry, oral histories of the South Pacific, and any and everything related to the overthrow of the Hawaiian kingdom, including a pair of rare, 19th century newspaper clippings  from Kuokoa, a native newspaper1. The most important books – Manu had many small volumes of history and verse – would likely go to the Bishop Museum in Hilo town. The disposition of the diaries would be negotiated at a different time, after Auntie consulted with Manu’s extended family.

Auntie came from distinguished lineage, and many of Manu’s poems and chants told the history of her family, along with other warriors of eastern Hawai'i. Auntie’s great-grandfather was, in fact, the chieftain of a group of splinter families who fought with the local chief Keōua against the ruling king, Keōua’s cousin the great Kamehameha back in the 18th Century.

The story is told that Keōua had offended Pele, the volcano goddess, by giving away Kamehameha’s fish ponds in Hilo to Keōua’s own favorite generals. These fish ponds were favorites of Pele, and she favored them for the rightful king, Kamehameha, not for Keōua, the jealous ruler in the east.

One year, while Kamehameha was fighting elsewhere, Keōua had marched to the western side of the island, destroyed some of Kamehameha’s property in the Kohala District, then on the way back granted the Hilo fish ponds to his generals in return for their support. As the men returned to the Puna district, they passed through the valley of the volcanoes and stopped to rest. Keōua and three squadrons of his men spent the night in the vicinity of the active volcano, Kilauea. A violent eruption occurred as they slept and killed most of the men, as well as many civilians in Ka’u district, which lies south of Puna and shares the volcano’s flank with its neighbor to the north.

The men who survived the blast took it as a sign that Keöua had offended Pele. They ceased to support him and returned to their homes in Puna and Ka’u, some of them enraged by Keōua’s disrespect and arrogant destruction of the King’s property. Keōua was lured to a temple not long after that and, as Manu tells it, Auntie Lulu’s great-grandfather Kaoleioku is the one who actually plunged the knife that killed Keōua on the altar at Pu'ukohola.

Manu knew this history well. He had grown up surrounded by descendants of its participants. He’d written the stories down in verse, and he would chant them around nighttime fires with every new generation of family or for the benefit of visiting strangers. They were songs of fire and rain and people and land – the elements of every story since the emergence of man. 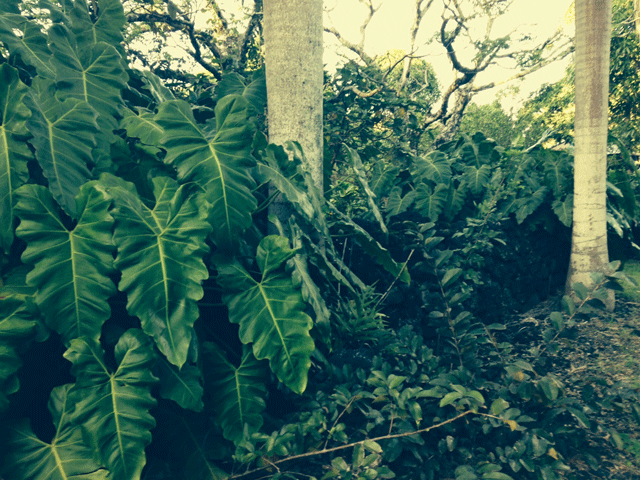 “Manu was a good man,” Auntie said as she folded a box top closed. “Difficult. But he learned from his life. He made amends. More important, he taught so many. He carried on history and tradition all right here.” She held a few of the diaries aloft. “Uncle was a quarrelsome gift from God but now he’s back with his ancestors.”

Auntie sat back against the edge of Manu’s bed. She wiped her forehead with a colorful handkerchief. “But we were talking about this kumu of yours.”

Auntie dabbed her eyes and tucked the handkerchief back into the wrap of her pareo, which was tied snug against the top of her chest. “Well then, this Kyle person.”

Pru shook her head no. “It’s bad enough I defiled Manu’s cottage by even mentioning him.”

“His workshops are next month.”

“Are you afraid of him?”

“Well then,” Auntie said. “It’s time to arm yourself.”

1For more on Keōua and Kamehameha: