Kapua sang a song of fire and rain.

Many had been drawn to the tent by his singing. Others listened from wherever they were, as his amplified voice was carried throughout the property. Around the perimeter of the tent, torches cast off vibrant orange and blue light, their flames teased skyward by the fingers of the song.

On stage, Kapua was illuminated by a pale white spotlight. He sang his final notes, looked skyward, and then bowed his head as Uncle Kawaimomona and the guitarist stopped playing. As he stretched out his arms, wide swaths of yellow fabric unfurled from his frame like muted sunlight. He drew his palms together and bowed in gratitude. The applause faded and he smiled as he left the makeshift stage. In the background, amid snippets of quiet, you could hear the hum of a generator feeding the stage lights strung along the underside of the tent. 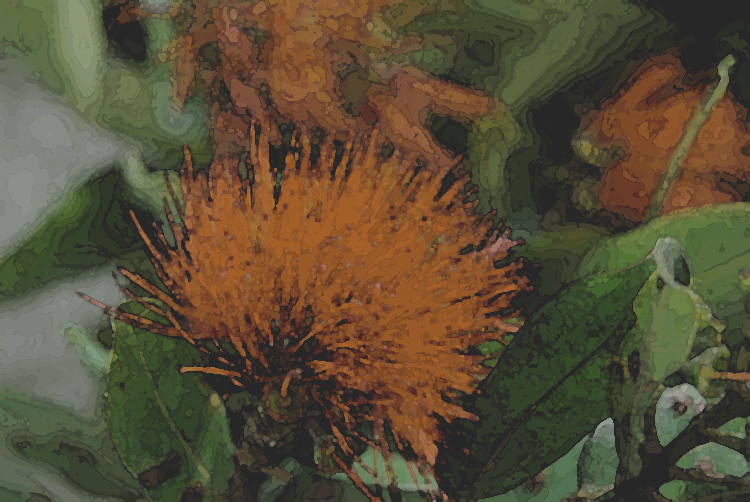 I’ilani and June were standing with Auntie Ruth, from the Volcano Inn, alongside the stairs where the performers came on and off the stage. The three of them had been lilting back and forth, seduced by Kapua’s ethereal singing.

Prudence approached them and slipped in alongside I’ilani.

When I’ilani realized she was there, she grabbed Pru’s arm and gave her a hug:  “I been looking all over for you! You ok, girl?”

“Why, thank you. But your mother and the Aunties did all the work.”

Prudence said excitedly, “Manu would have loved this.”

“I’m sure he’s floating around here somewhere having a good time,” replied I’ilani. “Oh, and you know who’s here?” she cooed. “My Kamoku! I have to introduce you. He dances with Ke Kai O Kahiki—.”

“They’re up next,” interjected Ruth.

“No Komaku, Ka-moku. A before O – as in unbelievable Ass and then Oh! my god…”

I’ilani fanned herself with a folded paper plate and pursed her lips.

“A special friend,” said the girl.

“Out of nowhere,” I’ilani told her. “Back from the mainland. Back at the halau. Shows up here like a god sprung up out of nowhere. Oh my oh my oh my.”

In a lawless jungle, sometimes love and desire reign supreme. 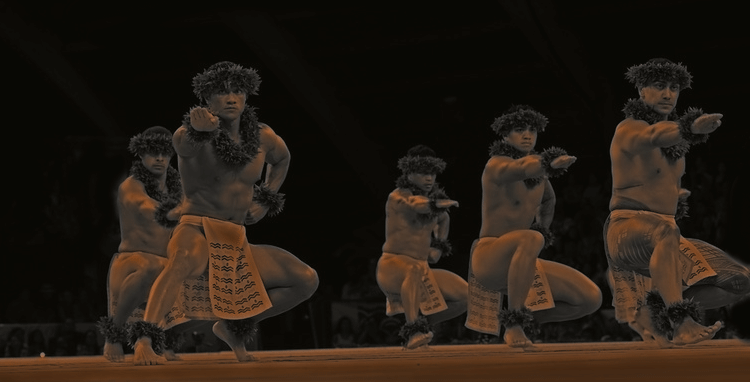 The kumu, or teacher, of the men’s hula halau walked solemnly onto the stage with a large gourd under one arm. He wore a simple white robe and around his head a wreath of leaves with red lehua blossoms.

The men of the hula troupe filed on stage, their hands poised on their hips like warriors of dance. They wore beige malo, or loincloth, and kupe’e of leaves (headbands, anklets and wrist bracelets) that they’d hand harvested from the jungle. In their muscled fists they carried ‘uli’uli, small gourds filled with seeds. The kumu offered an opening chant, which the men responded to in full honorific voice.

The kumu knocked the base of the gourd on the stage three times then slapped the side of it with his palm. He began chanting and the men set off into their dance, stomping their feet and extending their arms, telling the story of the rise of a windward king and wars with rulers from the leeward side of the island. Through their bodies and forms they narrated history while navigating ocean swells and traversing volcanic land.

The rattling of the ‘uli’uli and the stomping of the men’s feet drew the thousand closer to the tent. They filled the palm grove and covered the hillside. Cheers erupted, throngs of women whistled. The men drew in the clouds with their arms and blew out the wind through their lungs.

Auntie Lulu, in her role as Pele incarnate, moved through the throngs toward the makeshift road that ran along the edge of the property up to Prudence’s house. As she trudged up the road a very light rain began to fall, more like whispers than water, and the wind rustled the tall cane grass on either side of her. She moved quickly, her breathing becoming labored as the hill grew steeper. Once at the top of the hill she stopped and turned mauka, toward Kilauea. With her back to the masses below, she began chanting aloud a prayer, as though she were summoning the gods and ancestors.

All along Red Road, the houses stood empty. Everyone from Kalapana to Opihikao was at the gathering on Ohalani Road.

This was a good thing, because in the wooded realm of MacKenzie Park, where wispy ironwood evergreens tell lies and where people perennially wander in and disappear without a trace, noises were rising.

At first it was the sound of leaves rustling in the oceanside park. Then the shuffling of feet atop the mounds of spongy pine needles on the floor. Then the murmuring of men’s voices as bodies emerged from behind the trees. Torches caught fire as the men gathered into a large formation, waves crashing against the lava cliff below them. The warriors formed a rank and emerged from the ironwood grove, their bark cloth malo brushing like dry percussion against each other as they began their march along the coast.

The Night Marchers are spirits of old Hawaiians. Every year their ranks grow slowly, as new warriors make the passage from this sphere into the next. If they pass by you, don’t look them in the eyes: if you aren’t descended from them, they will take your soul.

The Night Marchers marched through Lower Puna chanting and carrying torches. They took the cliffside route, passing by the boat ramp at Pohoiki Road and the warm ponds in the vicinity of Green Mountain Lake. They strode across the 1955 lava flow, giving light to the pitch black night. They passed the cinder pits and marched along the Old Government Road through the jungled woods where Cousin Violet lives.

On the other side of that jungle lie vast tracts of macadamia trees. The Night Marchers made passage through them to avoid the populated Paradise Park subdivision, and headed deliberately in the direction of Hilo town. 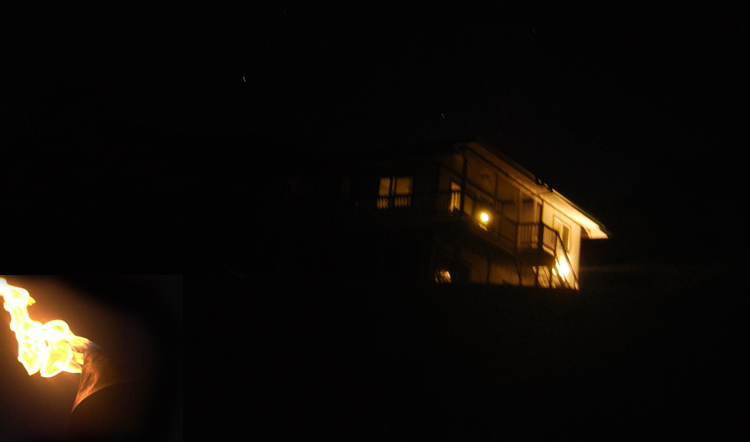 Back at Ohalani Road, at the top of the hill by Prudence’s house, Auntie Lulu was joined by Cousin Violet and Ruth Wana’aonani, from the Volcano lodge.

“Did you feel them?” Ruth asked.

Lulu, a contemplative goddess in flaming red pareo and a mane of wild black hair, bobbed her head slowly up and down, her frame silhouetted against the ruby orange glow of the volcano. “They’re on a long march tonight.”

“Do you think it’s in honor of Manu?”

“It feels much too ominous to be a celebration,” suggested Violet.

Auntie Grace, the pastor, showed up, slightly out of breath, alongside them. “Indeed what?” she asked.

“Indeed the glow is strong tonight,” Lulu said assuredly, not wanting to mention the Night Marchers in Grace's presence.

“You don’t see it every night,” Lulu replied. “Those of us who live along Red Road can see the difference.”

“Well, it’s only fitting. This is quite the celebration.”

“Yes,” said Lulu. She turned to face Grace and in her eyes there lingered a flickering flame of the fire from Kilauea. “Uncle’s mana was strong.”

“And he was the last of his kind,” remarked Violet.

All nodded in agreement.

Some people said that Manu was a kino lau, the spirit of an ancestor that had inhabited his body. It was a matter of small speculation and even smaller importance. As guardian and teller of history, and as both a descendant and an ancestor of other generations, he was joining the ranks of the Night Marchers this evening to continue doing what he did while he was alive: raising a torch against the dark. 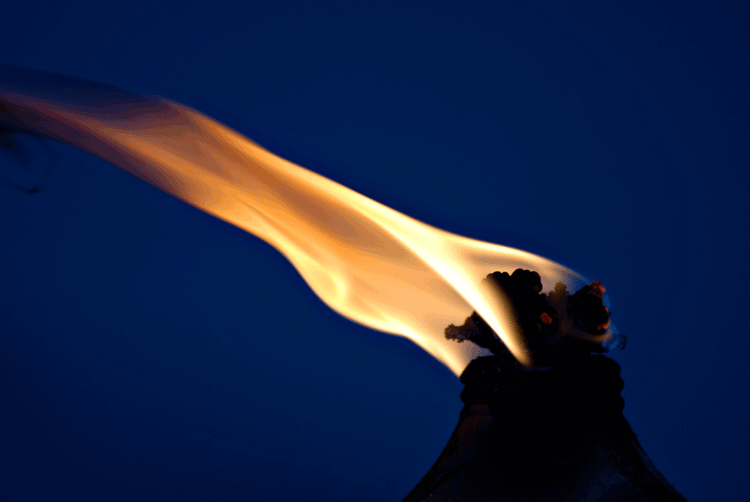 In Hilo Town, Kay Watanabe and Solia, the waitress, locked up the Garden Snack Club after a strange and wearily busy dinner shift. Solia stood on the sidewalk as Kay pulled the front door shut and locked it. “Spooky quiet now,” Solia said to her.

Kay retrieved the key from the lock and looked down Punahoa Street, which was deserted. She thought she saw a glow of light, like headlights in the rain, rummaging about the rooftops of town. Just then a furious wind kicked in from the east. “Where did you park?” she asked Solia.

“My car is still in the shop. Norbert is coming to get me.”

A clap of thunder cracked open the sky.

“Oh, that’s right. Well, quickly, then. Forget Norbert. Come with me. I’m just around the corner.”

“I know! In Hilo. Can you imagine?” Kay was sweating from the endless day she’d had – two days actually of kitchen chaos – and now this. She wiped her forehead with her forearm then tugged Solia along by the sleeve. “When it rains it pours, yah?”