4.4   Strange Doings at the Kalapana Cafe

Generally speaking, there is a latent calmness that underlies Puna, a peaceful acceptance of things in spite of the trials and tumult that come with (a) living on the flanks of a volcanco; (b) the influence of ever-variable and unpredictable weather;  (c) dealing with oneself and with others; and (d) being utterly dependent upon cargo ships for 80-95% of  the things you need to sustain you.

And while it may be irresponsible to disregard any of these risks – menacing clouds on the horizon, such as they may be – it is eminently necessary, when and if you are given the chance, to take advantage of a blissfully rolling sea when it is offered to you. When so offered you should feel obliged to shed absolutely everything, including all of your worries, and immerse yourself in the ocean’s grace.

There will be plenty of time for worry. There is seldom enough time for togetherness.

Prudence and Matthew left Kehena beach and drove south to the end of the road to have burgers at the Kalapana Village Cafe. They sat outside at a table under an umbrella and drank in the serene view of the magnificent dried Kaimu lava flow across the road.

Around them yellow and white hibiscus bloomed and green kukui nuts hung from their shade trees. Coco palms rose from the rocky ground along the perimeter.

While they ate, a small tour van arrived in the parking lot. There was a brief commotion as the passengers alit. There was the customary picture taking and a constant urging of the tour guide to finishing choosing what they wanted to eat they went before rushing off. People were hungry but the allure of the mass of black and filling in what used to be a bay fought diligently for the visitors’ attention.

Meanwhile, unbeknownst to everyone, Cousin Violet arrived in her old black jalopy. She parked and climbed out and then worked her way through the small sea of cameras and cheap Hawaiian shirts. “Aloha, Malea,” she said to the girl behind the counter. “A ginger ale, please.”

“And a grilled ahi sandwich. No bread.”

“Everything but the bread?”

“Put the mayonnaise on the side. Mahalo nui loa.” 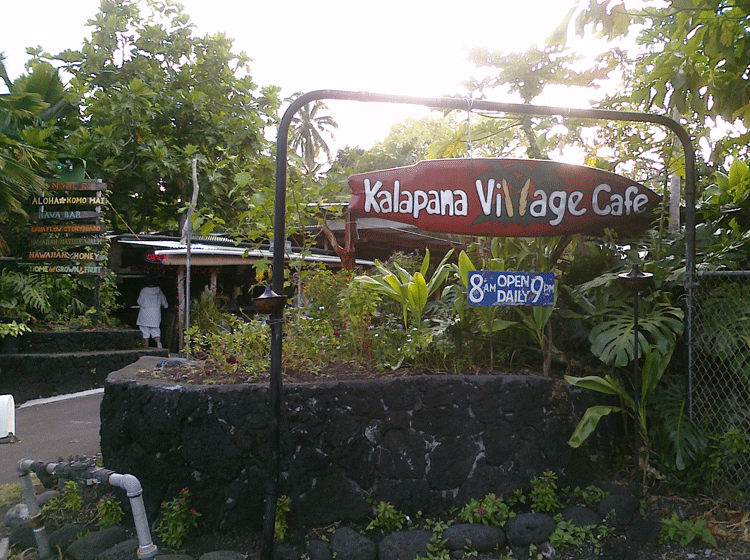 Violet paid the girl and came out onto the open patio.  “Prudence Overmeyer,” she declared in her firm yet spritely voice. “What a pleasant surprise.”

“Hmm. There were a great many people there.”

Prudence intervened. “You might have met him at my house. Matthew helped put the lights up in the tents. Remember it was drenching rain the day we set up.”

“Stand up,” Violet said to him.

Matthew looked at her inquisitively.

Matthew stood up. He was wearing a pair of board shorts and his slippers. His sinewy torso was freckled with sun and looked familiar to her.

“Ah, yes! You’re the naked boy from Prudence’s front yard. We saw you from the bedroom window.”

Prudence chuckled. Violet gave in to a quick grin.

“Relax,” said the older woman. “God gives, and then the old bastard takes away. There will be plenty of time for embarrassment. In the meantime, revel in what you’ve been gifted.” She sat down beside Pru. “In moderation, of course.” 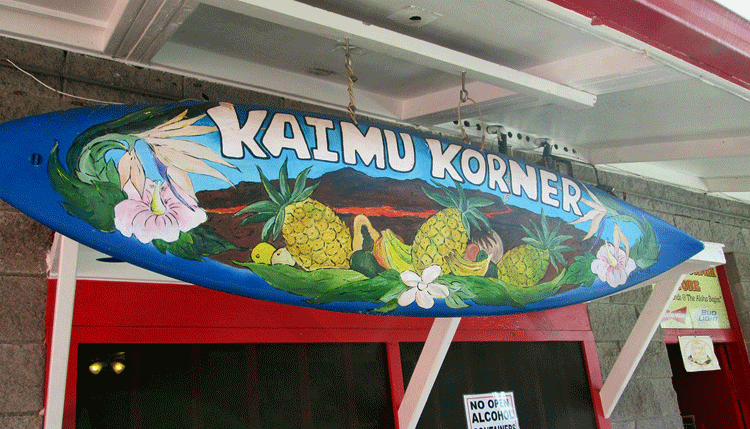 The three of them finished eating. Matthew and Prudence had waited politely for Violet to pull apart her seared tuna and eat it in meticulous precision, pairing each fastidious bite of fish with a dab of soy and mayonnaise, a bit of tomato and a bird’s portion of lettuce. During the meal, they had talked about things secular and dutifully unprofound.

“Do you mind if I smoke?” asked Violet when she was done. She pulled a clove cigarette from a pocket hidden within her black house dress.

“I wish you wouldn’t,” said Pru. “Those clove cigarettes are terrible for you.”

“What isn’t? Everything that gives us joy is deemed toxic by some authority or another.” She tucked the cigarette back inside her dress. “Speaking of which, Pastor Grace is having a few of us over for dinner on Thursday. I think you should join us.”

“Don’t be so sure. Lulu is annoyed with this Rinpoche fellow.”

“Well, it seems he’s going around to people along the rift zone, trying to get them to lease their land for geothermal exploration.”

Prudence grunted. “Why am I’m not surprised. What did I tell everyone: Rinpoche, my ass.”

“He’s quite convincing. Or so I’ve been told.”

“So what does that have to do with me?”

“Apparently you knew him.”

“I did. He’s the one who brought me to the Big Island for the first time.”

“Cousin Ruth thinks it would be good for you to join us, sort of as a buffer during dinner, and maybe to provide some insights into dealing with him.”

“I’m hardly going to be impartial; I can’t stand the man.”

“And geothermal is hardly a conversation I want to have with this crowd,” insisted Violet. “Especially if I’m trying to digest Grace’s cooking at the same time. So please come. There will be fireworks, otherwise: Ruth Wana'aonani and Grace are at opposite ends of opinion and, if you can imagine, apparently very heatedly. With you there they’re likely to temper their opinions somewhat.”

“You haven’t forgiven me for the potion, have you. Is that why you’re reluctant?”

Prudence put her hand on top of Violet’s and said with great theatricality, “What potion?!”

Violet leaned back. “Oh my! You don’t remember?”

Prudence looked deadly serious: “What are you talking about?”

“Oh my oh my oh my.” Violet bobbed her head, thinking quickly through things: the formula, ingredients, preparation. “I’ll have to make some changes. It isn’t supposed to make you forget everything.”

Prudence took her hand away and picked up her soda cup. She sucked down what was left of the root beer in it and set it back down. “Ha!” she said. “I’m kidding, Violet. Of course I remember the potion.”

“So you’ll come to dinner?”

“I think it’s a terrible idea. Especially if the topic of conversation is in any way related to Kyle Weatherly.”

Violet pressed the palms of her hand together. “Please?” Accustomed to having her way, Violet rarely resorted to pleading.

“Now, you’re sure your hesitation has nothing to do with the potion?”

“Oh, thank heavens. For a moment there I was afraid I’d made a terrible mistake.” 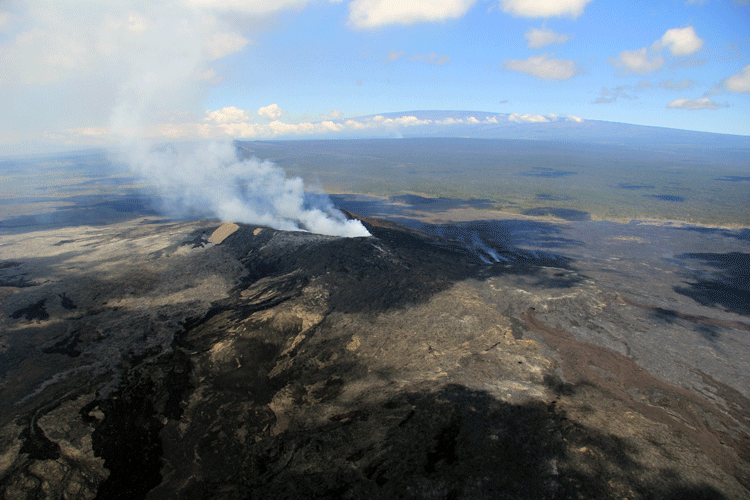 After lunch Prudence drove Matthew up the Highway to his house. He lives just mauka of the intersection of Ohalani Road and the Highway, right by the steam vents. The vents are a series of steamy pukas surrounded by mounds shaped like mud huts. They sit roughly fifty or so feet off the road, scattered on both sides.

Through these vents Kilauea releases some of its endless heat. Meeting up with underground water, the heat forms a geothermal steam which rises from the volcanic underworld and travels through secret unmapped channels that eventually lead to these steam vents.

This is the rift zone. Prudence and Matthew, and several thousands of people, live along the rift.

Although Pele’s official home is the caldera at the summit of Kilauea, the rift zone is where she plays, having set up camp, if you will, in Pu’u O’o, which is the small crater that is the source of the current lava flow. Topographically, the rift zone is like a raised rib that runs along the northeastern flank of the gently sloped Kilauea. Here and there, pukas blow open and put on tremendous displays of fire and sparks. Fissures open and years-long rivers of lava emerge; they rise, stall, flow and divert themselves, moving across the land and around obstacles as if reading the terrain in braille.

In various places along the rift, inclusive of these steaming caves located upslope from Prudence’s property in what is essentially Matthew’s side yard, volcanic energy is evidenced in soothing steam that rises from the ground.

People often come and sit inside the hot sopping chambers to cleanse their skin or steam their way to a deep night’s sleep. Some have spiritual rituals in them. Some come here to get stoned. Others will have sex.

(Be sure to wear your slippers if you visit.)

Prudence uses the steam vents when giving directions: From Hilo head south along the main Highway, then at the old sugar mill (there’s a stoplight) turn left onto Highway 130. Drive 11 miles and you’ll see the sign for Pahoa town. Drive six and a half miles more and then prepare to slow down and put your turn signal on as soon as you see the old painted church. Ohalani Road will be about two hundred feet on your left.  Just past where you see steam coming up along both sides of the road. 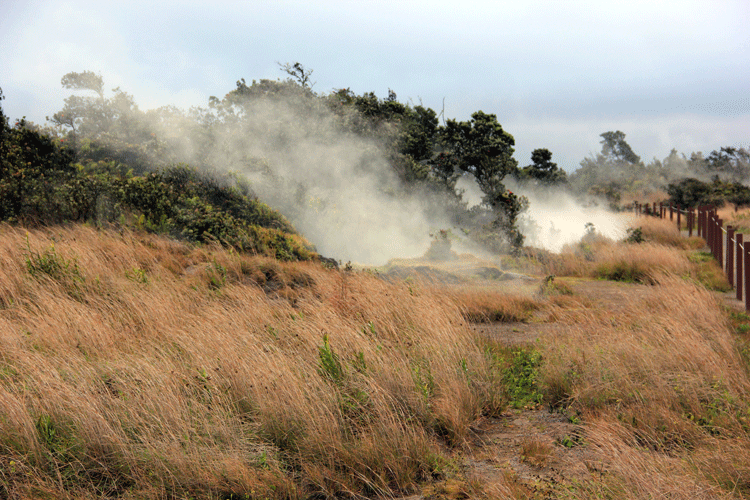