The lawn in front of Prudence’s house was so dry that large swaths of grey rock were now exposed. The entire hill upon which she lived had been transformed into a crusty knoll covered in brittle grass. On the hillside leading down into the property, tall clumps of bamboo rose wearily toward the sky, their thick stalks nearly leafless as they tried to preserve energy. 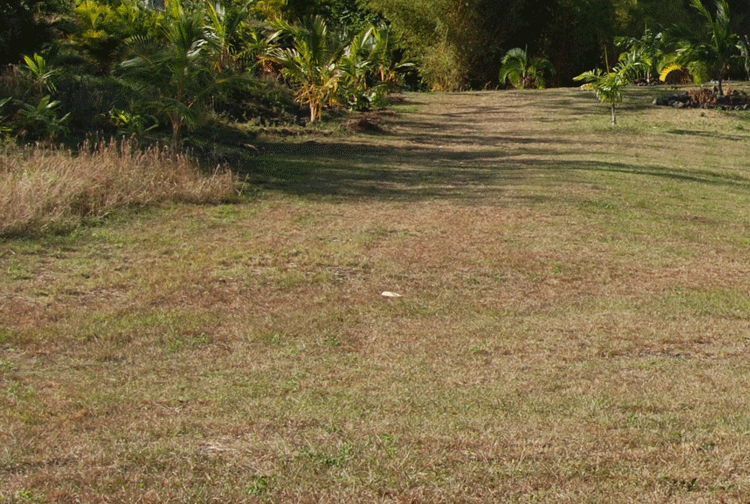 Lau Lau pulled into the dusty yard and honked the horn.

Prudence came down the front stairs, pausing just before she reached the bottom. She noticed there was a young Hawaiian woman in Lau Lau’s truck. A girl, really. Girl being the operative word.

She approached the truck, smiling tenuously at the girl through the windshield.  She walked around and stopped at the driver’s door. “Aloha, Lau Lau.”

“And aloha—?” she stared at the girl.

The girl leaned in against Lau Lau and said, “Kiele.”

“Yes, I know. We didn’t meet but I was here for Uncle’s luau. That was some party.”

“Kiele is my keiki hanauna,” Lau Lau said proudly. “My niece. Daughter of my brother Amoka. She goes back to Honolulu to school this week. UH-Manoa.”

“Ah…” Suddenly Pru’s jealousy cleared, like passing clouds erasing the sky. “Good for you, Kiele. What are you studying?”

Prudence placed her hand on the thick muscle of Lau Lau’s forearm. “We all have our talents, Lau Lau.”

“At least that’s what I tell myself.”

Lau Lau was smiling and talkative today. Kiele’s presence seemed to have lifted him out of that lull of sameness, the glad rituals of existence which typically found him moving quietly about the earth.

“Come on,” she said, stepping away from the window. “I’ll hop in the back and you can drive us down.”

“No no,” he insisted. “Kiele,” he told the girl, “slide over and let Auntie Pru sit next to you.” 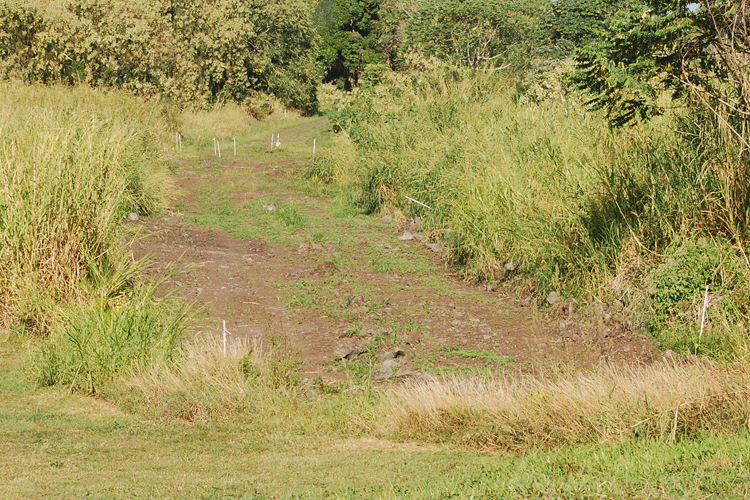 The truck rumbled down the makeshift road, its tires clutching the rocky path. Blistery waves of cane grass slapped at the side mirrors and scratched against the roof of the truck.

“Thank you for coming over, by the way,” said Prudence, dust and cinder rock kicking up behind them.

“Any thing for you,” Lau Lau replied.

“I’m getting excited. Ever since Manu died, I knew I would have to do something with the ‘ohana, but nothing sounded appealing. He was such a presence. I know I can’t replace him—.”

“But what I can do is find someone else who will make it their home, and they’ll have new experiences and we’ll have a new relationship.” She grabbed the handle over the window as the truck bounced along the tracks. “Or not—. Who knows.”

“Exactly,” said Pru. “Remember that,” she said to the girl sitting next to her. “Every day is a do-over, but nothing is ever the same twice.”

The truck emerged from the brush and Lau Lau steered it into the clearing. “Where to?”

“Over there,” she pointed. “Cut through the coconuts and park by the entrance to the fire pit. There’s a pig path I want to show you.” 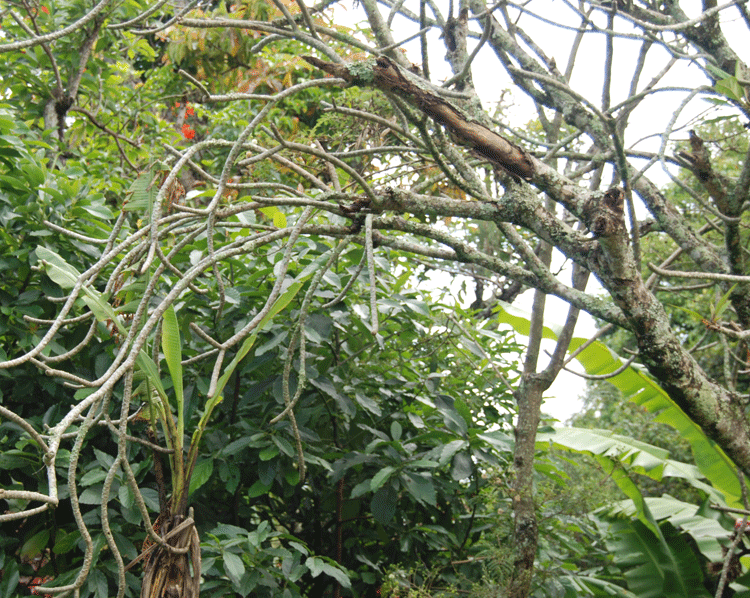 “So what you’re gonna do with all this?” Lau Lau cleared some broken branches that had fallen across the pig path. He and Prudence were about a forty feet into the jungle. Kiele had stayed back at the truck.

“Well…Do you think you could get a D5 or D6 in here and clear it out? All the way to the road?”

“I want to put down some three-quarter gravel and then eventually add a gate.”

“I know a good guy can build you a gate. But I don’t do bulldozers. You need to talk to Kam Wilson.”

“He’s the one who scraped the road to our place. After the lava comes round it. Works for the County.”

“I didn’t realize that.” 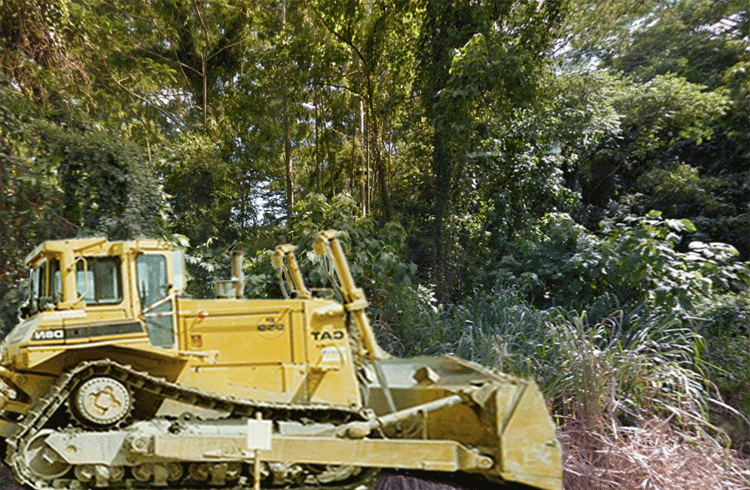 A few days later, Prudence was drawn outside by the sound of a mighty engine moving through her jungle driveway. She went out onto the side lanai. It was a little before ten and Matthew, who had come over earlier to help, followed Pru outside.

Kam the pig hunter was pulling into the property in his monster truck, behind which he pulled a flatbed trailer with a large yellow earth scraper on top of it.

Kam’s massive machinery was just barely able to squeeze between the eucalyptus trees at the entrance. After clearing them, he drove to the side of the house and came to a stop at the head of the makeshift road. The reverberation of the truck’s engine caused the wooden porch to quiver beneath Prudence and Matthew’s  feet. 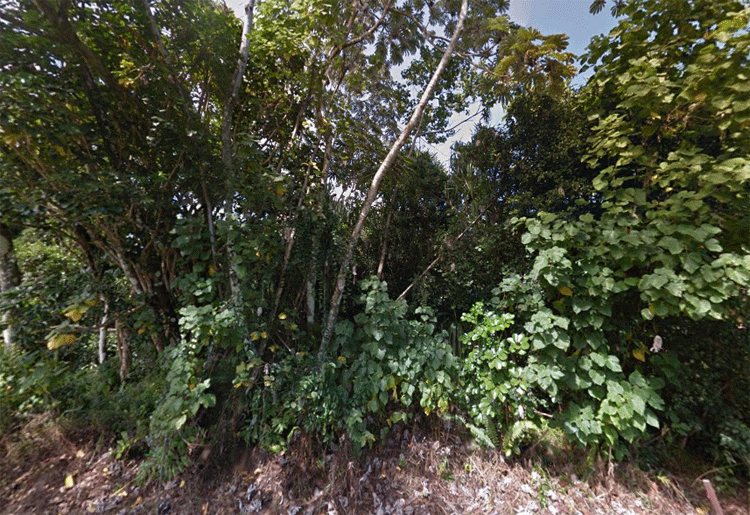 Prudence had walked the pig path with Kam the other day. Having taken Lau Lau’s advice, she called Kam and asked him if he’d be able to clear a road from the ‘ohana out to Ohalani Road. He arrived and they walked the length of the path. As they pushed their way through the brush and mosquitoes out to the main road, he sprayed a green X from a can of spray paint onto various trees along the way.

“That’ll be more or less the path,” he said.

Before he left, he asked Prudence to tie a strand of bright orange rope around each of the trees he’d marked. (He had some in his truck that he would give her.) Those would be his guide for ripping a path through the jungle.

“That’s a huge machine!” Prudence called to Kam as she came down off the lanai.

“Big fucker, no? D8. She’ll clear it out in no time.” Kam looked up proudly at the yellow behemoth, its front scraper big enough to hold a sedan and its treads as tall as a person.  The big ripper on the back end looked like it could yank a two-ton piece of blue rock out of the ground like a finger digging a pebble out of dirt. “Normally I start at the main road and come in, but since we don’t wanna raise people’s noses,” he said, “better we start on the inside. Then when the road is pushed through it’s all done, and that’s that.”

“How long do you think it’ll take?”

“One day to rip, a couple more days to get it smooth. Unless we run into a lava tube.”

“And what about the cinder?”

“You marked the trees already?”

“Yes. Matthew and I finished this morning. We tied the string as high as we could. Just like you asked.”

“Good good. It’s hard to see from up top there.”

Prudence shielded her eyes, and looked up at the driver’s seat of the bulldozer. It seemed like it was three stories tall.