Prudence stood on the back lanai overlooking the hordes of Punatics – kanaka maoli, haole, and all flavors of kama‘āina – that had descended upon her property defs.

Truth be known, to call someone a Punatic used to be offensive. It meant that somebody was an unbathed, perennially stoned society dropout who could hold a roach clip with precision but couldn’t hold a job for more than a few hours. But in Prudence’s realm, the word had been co-opted into something more lovely and embracing.

She herself had descended from a clan of wandering hippies (not so much born into it as kidnapped by it, but that’s a story for later). When she arrived on the Big Island her hair was knotted in an unwashed sort of dreadlocked woe and her harem pants were a ragged shame. The rusted jalopy she and Kyle Weatherly bought for literally a song and a brick of hashish, in which they traversed the Red Road from Kapoho to Kalapana during their days together, further stigmatized her as a bona fide Punatic.

In the years after Kyle, however, as she eased into life in Puna, she reclaimed the term to signify something more profound: A Punatic, as she defines it, is a willing and conscientious denizen of Puna, an adopted child of the land who knows that all things good and paradoxical come at the behest of the Sun and are manifested through its child, our planet. Punatics know, honor and sometimes dislike one another. We have arguments. We forgive. We are of many races and origins; gay and straight and mahu or aikane defs. We have some money, a lot of it, a little or none, yet we live aloha equally and to the best of our abilities. A Punatic is willing to yield his or her ego to do what is pono: what is right. We gather and celebrate; mourn and rejoice. We’re good people. We are aware of our feet planted on the rocky ground and our bodies immersed in the turbid blue sea.

This good earth reminds us that as Punatics – as people -- we’re bound to this planet for an unspecified period of time, captive children of its ferocious beauty.  We remain mired in its delicious gravity as our days wind up or wind down, but ultimately, eventually, we all become siblings of the stars.

“Motion through trees,” is what Prudence said to Auntie Lulu. They were standing on the lanai overlooking the festivities.

“The view: it’s just a bunch of motion through the trees: the blur of lights and people wandering around everywhere.”

Everything was indeed a blur of sound and muffled motion flickering amid splashes of fire that punctuated the whole of the nighttime yard like stars in a galaxy on earth. Prudence strained to focus on any one area: the jungle courtship with the shower trees in front of Manu’s cottage and the great spanning monkeypod; the palm grove where the hula tents were set up; the eating tents; the hillside and its great thickets of grasses behind which hid the makeshift road to the grounds…

“This is why we love our Puna, isn’t it,” said Auntie.

“I can’t believe the turnout. He was an amazing man, wasn’t he.”

“An amazing, wonderful pain in the ass, yes. Uncle was a gift.”

Overhead, the thick band of the Milky Way hovered like a city in the distance. Apparently Lono, maker of the rain, was in a partying mood; he’d been keeping the rain at bay, although here and there the dark outlines of clouds made teasing appearances throughout the sky.

“So this is why you and the Aunties didn’t want me to do anything, isn’t it?”

“Yes. If we told you how many people were coming you would have been a wreck.”

“That’s good.” Auntie Lulu abruptly raised her hand and pointed a finger. In her big red pareo and wild mane of hair she resembled the volcano goddess, Pele, as she thrust her arm forward. “Listen.”

“Kapua is taking the stage.”

Kapua was a famous local singer -- a mahu, that is, a man who lived outwardly as a woman. Kapua had a beautiful voice, sweet at its upper range like a breeze through lehua blossoms, rich in its lower timbre like the rumblings beneath the rift zone. When he sang he commanded attention, not simply because his voice was strong and beautiful. Nor because he was a large (wo)man in a flowing yellow robe. When he sang he channeled the strains of the planet and evoked the memories of his ancestors.

“Go listen,” Lulu said to Pru. I’ll be down shortly. I want to take a deeper breath.”

Pru pressed her hand on top of Lulu’s and then left. She moved through the people lingering on the side lanai. Many of them were focused on the volcano, miles down the road, its flank glittering red with flowing lava and the crisping of trees. In the caldera, up at the summit, a fountain of fire gurgled into the air and capped the low mountain with a halo of a moody orange glow. 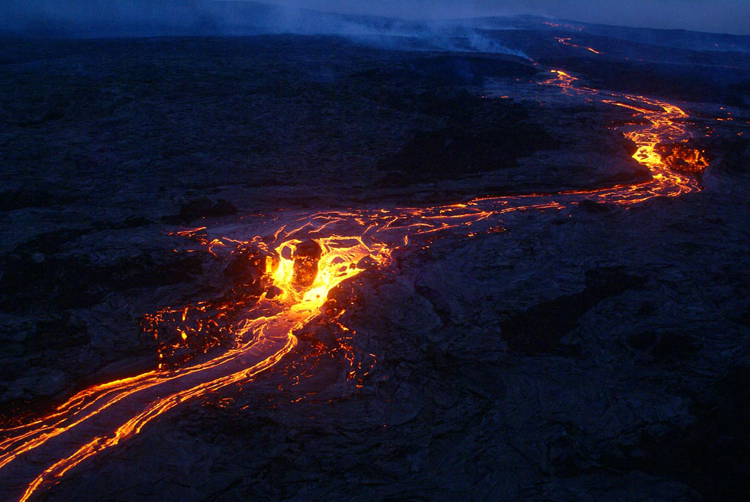 As Auntie Lulu stood quietly alongside the rail admiring the magnitude of Manu’s sendoff, Cousin Violet appeared alongside her, like a spritely helper materializing at the beckoning of her goddess.

“Thank you, Cousin. But you and Grace and Ruth deserve all the credit.”

“Nevertheless.” Violet extracted a clove cigarette from a pocket hidden within her simple black dress.

Lulu looked at her quizzically: “Where did you come from just now?”

“You should be careful. Somebody will see you do that.”

“You’re not so subtle as you think.”

“Perhaps. But I get tired of walking up and down that hill.”

defs
kanaka maoli = native Hawaiian
haole = a foreigner, esp a white person
kama‘āina = locals
mahu = a man who lives outwardly as a woman
aikane = an intimate male friend of lower rank involved with a man of ali'i (noble) rank
back up ↑